This article details the results of the most recent QATC quarterly survey on critical quality assurance and training topics.  More than 50 contact center professionals representing a wide variety of operations provided insight regarding the use of reward and recognition programs in their centers.

The largest number of participants is from call center operations with between 101 and 200 agents.  However, the balance is widely dispersed across all ranges. This mix of respondents provides a broad spectrum of call center sizes.  Financial, healthcare, insurance, and “other” have the largest representation but there are participants from a wide variety of industries. 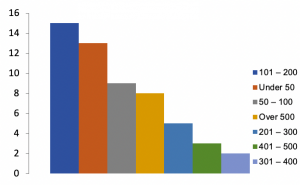 Respondents were asked If they have a specific budget for reward and recognition programs.  Slightly more than half (56%) reported that they do have budget for these programs while 44% indicated that they do not.  While many rewards/recognition options can be done with little or no money, when there is no budget set aside for these programs, it can feel like an impediment.

Respondents were asked what the budget is per person on an annual basis and the responses were mostly split between less than $100, between $101 and $300, or over $500.

Respondents were asked what criteria was used to determine eligibility for rewards and multiple answers were allowed. Quality scores and customer recognition top the list with the most responses.  Attendance and schedule adherence were the next two choices, with “other” and sales results picked least.  Sales rewards may be a part of base compensation rather than part of a rewards and recognition program, but it always nice to be recognized even if the paycheck sees the reward. 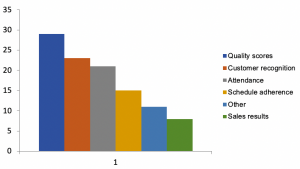 Survey participants were asked who has the responsibility for granting rewards to the staff.  Supervisors and the management team drew the bulk of the responses at more than 40% each.  The quality team drew 11% as well.  It is important that the determination of reward recipients be as transparent and fair as possible to have the desired effect.  Where there is doubt about favoritism or “game playing,” it can be counter-productive. 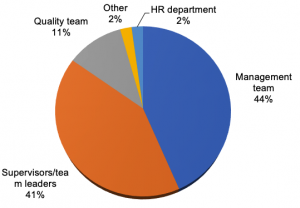 Respondents were asked how frequently rewards are distributed and multiple answers were allowed.  The most selected option was on-the-spot as needed followed closely by monthly.  While it is important to “catch someone doing something well” with on-the-spot rewards, some statistics need time to accumulate to be meaningful (such as adherence to schedule).  The frequency needs to be often enough to keep people’s attention but not so often as to become expected. 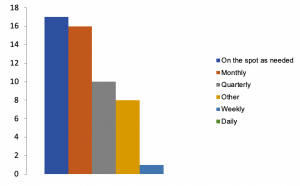 The respondents were asked if they had a reward program that was peer-to-peer.  Only about one-third (33%) indicated that they do.  This can be very effective in focusing the entire team on recognizing great performance in others, and therefore in themselves.  It also takes some of the burden off the supervisors/managers to be the sole administrators or the program.  However, it is important to ensure that it remains fair and appropriate. 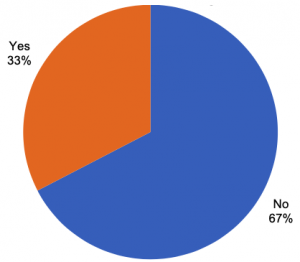 Respondents were asked if cash is used as a performance reward and three-quarters (76%) indicated that they do not use cash.  Those that do may be using it in a sales situation where cash is often the most desired reward.  However, rewards need to be meaningful to the recipients and what is important to one may have little meaning to another.  For example, tickets to a baseball game might be delightful to one agent, while tickets to a concert might be more meaningful to another. 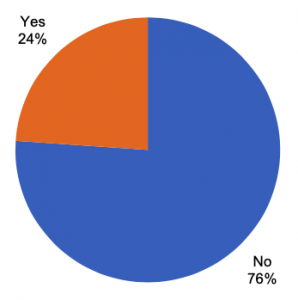 Respondents were asked to identify the rewards that they use from a list provided in the survey and multiple choices were allowed.  Gift cards topped the list by a significant margin.  Company merchandise, food/beverages, and entries to a prize drawing were the next most frequent choices.  It is interesting that “time off the phones” was only selected by a few, but it may be one of the most desired by agents. 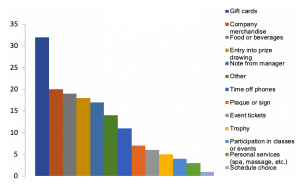 Respondents were asked if agents who earn rewards are given a choice of which reward they receive.  Only one-third offer that option.  Once again, giving agents choices from a list of possible rewards can be helpful in matching the reward to the specific agent to maximize the benefit to both agent and center. 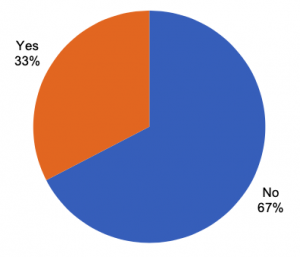 Respondents were asked to grade their reward and recognition program in terms of its effectiveness in encouraging and reinforcing good performance.  Only 9% graded their program as excellent in shaping performance with 15% at the other end of the spectrum grading theirs as poor.  Good and Fair each received 38% of the responses suggesting that while many programs are doing some good, there is room for improvement. 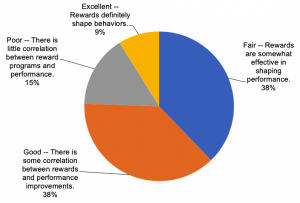 Respondents were asked to describe the most effective program they had implemented that affected performance.  The following are some sample answers:

This survey provides some insight into the use of reward and recognition programs among the respondents.  While most appear to have some kind of program in place, it may not be formal or well-funded.  Most respondents indicated that there is room for improvement in the effectiveness of these programs in impacting agent performance.  Like any motivational factor, the value of any gift is in the eyes of the receiver.  Having a program that allows the agent to select the reward that means most to them can improve the impact.  But some of the most motivating options are simple recognition of a job well done which can have little cost to the center.

We hope you will complete the next survey, which will be available online soon.